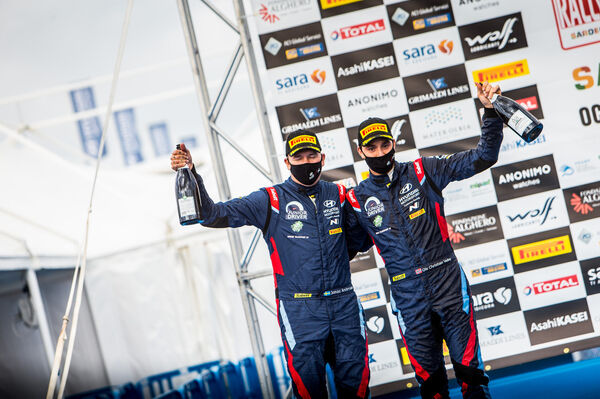 Ole Christian Veiby completed Rally Italia Sardegna second of the WRC 2 entrants after a weekend of highs and lows for the Hyundai Motorsport crew. Together with co-driver Jonas Andersson, he battled through numerous punctures over the weekend to finish 28.8-seconds from the eventual winner in his Hyundai i20 R5. He finished the 16-stage event second in the WRC 2 category, equalling his best result of the season from Rally Sweden earlier in the year.

Running over three days of competitive action, Rally Italia Sardegna - while being a familiar event to most crews - was held in later autumnal conditions due to the restructured 2020 calendar. Lower temperatures gave the narrow and twisty gravel stages a different characteristic, with tyre management and strategy an influential factor over the weekend.

Friday’s six stages offered a representative glimpse of what was to come with highs and lows from the outset. Veiby, alongside co-driver Jonas Andersson, picked up a WRC 2 stage win in SS2 (Erula-Tula) to take an early lead but then saw his advantage eradicated with a puncture on the subsequent run through Tempio-Pausania (SS3). He clawed back positions with another fastest time on SS4 (Erula-Tula) and second quickest through SS5 (Sedini-Castelsardo).

Saturday was equally eventful as crews faced an early start with the 22.08km Monte Lerno stage (SS7) starting shortly after sunrise. It was a trouble-free run but that wasn’t to last for long as Veiby experienced another puncture on the following test (SS8 Coiluna-Loelle), while also contending with an open boot. Thankfully, the remainder of the schedule ran smoothly for the Norwegian with competitive times through the repeat loop and the afternoon’s return to Sedini-Castelsardo and Tergu-Osilo, which were both run on Friday, as he held third in WRC 2.

Veiby was involved in a close battle for second in WRC 2 on Sunday morning. He wasted no time in claiming the position on the morning’s opening stage - Cala Flumini - and then extended his advantage. Even a puncture in the Power Stage could not prevent the crew from confirming their second-place result.

“What an eventful weekend! While I am satisfied with second in WRC 2, I think we deserved the win this weekend. We had targeted a victory push on the final morning but sadly that was not possible. Punctures have really been the story of our rally. We showed some promising pace at times, winning two stages in our Hyundai i20 R5, and we were able to fight back over the three days. We were in third place heading into the final morning and quickly moved into second. As the gap reduced, our hopes increased but we picked up a rear puncture in the Power Stage and could do no more.”