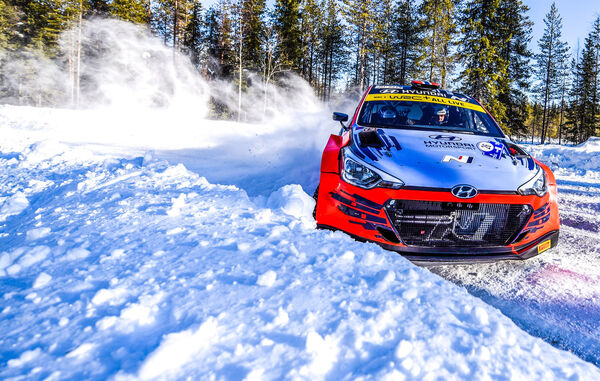 Under perfect winter conditions with snowbanks and beautiful weather, the city of Rovaniemi hosted the Arctic Rally Finland 26-28 February.

This was the first time the WRC visited a wintery Finland and a total of 10 stages were contested around the hometown of Santa Claus. Ole Christian Veiby and Jonas Andersson were competing in a Hyundai i20 R5 with Red Grey Team and Hyundai Motorsport. Including names as WRC-drivers Andreas Mikkelsen and Esapekka Lappi, there was an impressive entry list for the WRC2 category.

- That’s the first ever WRC Arctic Rally Finland over, and what an event it has been! Amazing superfast winter roads, perfect weather conditions, it’s been an adventure to compete on these stages. In the end we finish 5th in the WRC2. It was a demanding weekend for us, we had an issue already on the Friday with a throttle that got stuck and we lost a bit more than a minute on that. It was a challenge with traction on Saturday, but we worked hard on the set up and in the end, we were close enough to the pace of the leaders. Happy to get 3 bonus points from the power stage, that’s good for the championship!

Ole Christian and Jonas finished in a strong 5th O/A in the WRC2 category and claimed 3 extra bonus points after setting the 3rd fastest time on the Power Stage.