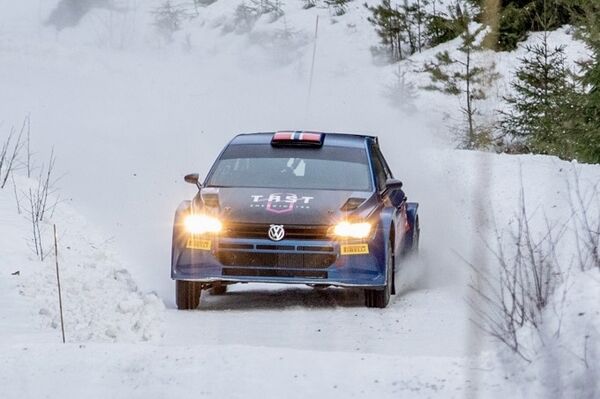 - Such a disappointment to not finish the rally today, said Ole Christian, who were leading the rally when he hit a rock on the final stage and had to retire from Rally Hadeland.

Rally Hadeland was the second round in the Norwegian Rally Championship and also the second of 3 consecutive snow-rallies. Ole Christian and co-driver Stig Rune Skjærmoen took the lead on SS3 with the Volkswagen Polo R5 and were still leading when a puncture and a rock forced them to retire on the final stage.

- Such a disappointment to not finish the rally today. Going into the final stage we had a solid 9,8 second lead! On the stage we had to stop and change a wheel after a puncture. No complaints on the speed showed by co-driver Stig Rune! We got going again but later we hit a rock and that was it. Game over for us today. Up until that point we’ve had a really good day, our car was perfect, and we were fastest through 3 of the 6 stages. Ah well – next time!