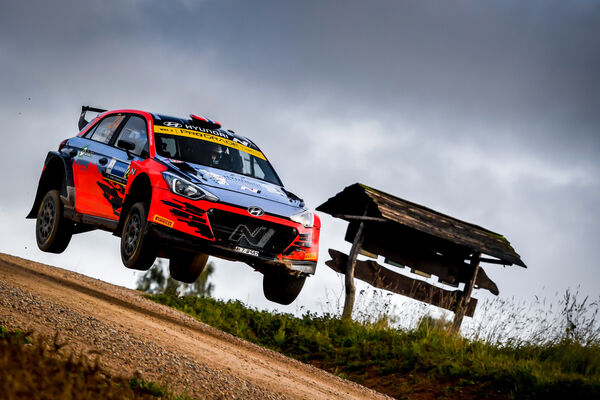 After the stage win on the opening stage on Saturday, Ole Christian Veiby and Jonas Andersson suffered a frustrating weekend with various issues on the opening day, and a crash on Sunday’s penultimate stage.

A shortened schedule started with the fast blast through the 1.28km Tartu stage on Friday before moving onto an intensive two-day itinerary that covered an additional 16 stages and 230 competitive kilometres.

Veiby was quick out of the blocks on Saturday morning, setting the fastest WRC 2 time in the opening Prangli test (20.23km) but the Norwegian was to hit trouble for the rest of the day. Picking up driveshaft damage on the subsequent stage (SS3 - Kanepi - 16.89km), he struggled for pace for the remainder of the morning loop - battling through Otepää (9.6km), Mäeküla (14.76km) and Elva (11.72km). With the issue fixed during midday service, the crew resumed their attack but a double puncture on the repeat of Kanepi, with no spare tyres, forced an early retirement for the day. On Sunday the duo had to retire after a roll on the second stage of the day.

“It has been a really tricky weekend. I had a good start on Saturday with a stage win but after that we got an issue with the driveshaft so we struggled with that a lot. On the second loop, we got two punctures and were forced to retire. Today was just about cruising through but I cut a bit too much on one of the corners, which made the car go up on two wheels and, sadly, we rolled a few times. I went for a medical check-up and all is OK, so we look forward to the next one.”