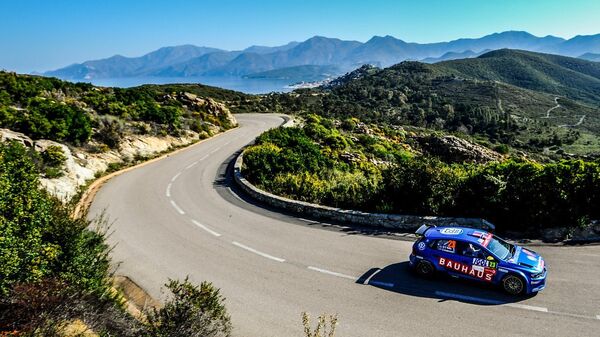 Strong performance in Corsica by Veiby

The young Norwegian were holding a podium-position when he unfortunately had to retire on Sunday morning. – We gave it our best push to climb another step on the podium, we didn’t come here for third, Ole Christian said afterwards.

Starting the season with a third in Monte-Carlo and then a very strong and convincing victory in Sweden, Ole Christian had his eyes set on a higher place on the podium for Corsica. Going in to the final day of the rally, Ole Christian and co-driver Jonas Andersson were holding third, but only 12,5 seconds behind Gryazin who were P2. Unfortunately the rally came to an end a couple of kilometers in to SS13. – In a right-hand corner we didn’t cut enough and got caught out by the loose, we then hit a rock and damaged the left rear suspension. Nothing we could do to fix that and the rally was sadly over.

Ahead of this rally Ole commented that he wanted to win events and that is was no alternative to go safe and secure positions. – We gave it everything here, we didn’t come here to be third. We had second position within reach, but we had to push really hard to get it. We did that, but sadly we ended up with a broken suspension.

A puncture on the Friday saw Ole Christian and Jonas loose time and drop down the leader board. But determined to get back in fight for a podium, they immediately started the mission to get back time. – After the puncture on Friday we decided to focus on details to get back in the fight. After the first pass through the long stage on Saturday, we decided there were two split sections that we could focus on. We analyzed, watched video and fine-tuned our pace-notes. We did that split-sections many seconds quicker than the first run through. Sadly we never got to the next split-section, as we the stage were stopped due to the fire of Camilli’s car. Our pace has been good and strong this weekend, and that’s what we take with us and will continue to work with!

The WRC2 class were won by Italian Andolfi, with the Russian Gryazin second. Kajetanowicz took third. After Rally Corsica, Ole Christian Veiby keeps his lead in the overall drivers’ standings. Next WRC event will be Rally Portugal in the end of May, this time also in the Volkswagen Polo GTI R5 with Kristoffersson Motorsport/ Volkswagen Dealerteam Bauhaus